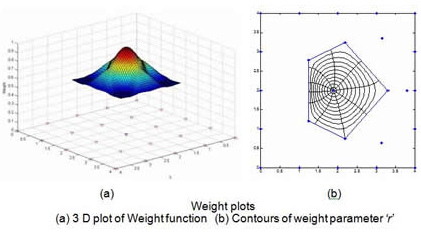 A new method of determining compact support based on Natural Neighbors is proposed by which the compact support size and shape of all nodes are automatically formed. This method is used in MLS method of shape function formulation. Example problems have been solved using this method to determine its ability to accommodate changes in density of nodal distribution.

Atomistic Simulation of Grain Boundary Sliding at a Triple Junction

Grain Boundary Sliding is an important mechanism in superplastic deformation. There have been many empirical as well as micromechanical models which have tried to explain grain boundary sliding at its effects. Atomistic studies of the deformation mechanisms in nanocrystalline materials have also been done to gain an insight into the processes that take place at the atomic scale. Recently, a quasicontinuum study of a grain boundary sliding at various bicrystal interfaces has successfully reproduced the results obtained from atomistics along with a serious computational advantage that allows us to model larger systems. This Quasicontinuum analysis has been further extended to triple junctions in our studies.

Quasicontinuum simulations were performed to understand the mechanical behavior of a pure Copper. Triple Junction under various loading conditions. Tensile displacements were applied on different grains of the triple junction and effect of grain orientations on the stress-states was studied. It is found that the deformation near the triple junction is heavily dependent on the direction and location of loading. The effects of shear displacements on the stress-states were also studied.

Assessment of r-adaption algorithms based on configurational force method and spring analogy approach is made. Assessment is made based on qualitative and quantitative aspects of error estimates, convergence rates and mesh quality. Appropriate modifications to node relocation procedures are proposed for enhanced performance. A simple linear projection technique is used to improve convergence characteristics of the material force node relocation algorithm. Performing mesh adaption on initial mesh results in a considerable reduction in gradients of strain energy. Assessment based on suitability of mesh adaption algorithms for structured and unstructured initial meshes has been performed. It has been observed that the configurational force method is more robust. Comparitive study indicates the superiority of the configurational force method.

The proposed enhancement to the mesh adaption is based on configuration force method for r-adaption together with weighted Laplacian smoothing and mesh enrichment through h-refinement based on estimated discretization error in energy norm. A further reduction in the potential energy and the relative error norm of the system is found to be achieved with combined r-adaption and mesh enrichment (in the form of h-refinement). Numerical study confirms that the proposed combined r-h adaption is more efficient than a purely h-adaptive approach and more flexible than a purely r-adaptive approach with better convergence characteristics The combined refinement strategy has been implemented for plane problems, biomaterial interfaces and laminated composite plate bending problems.

Rajagopal. A and S M. Sivakumar